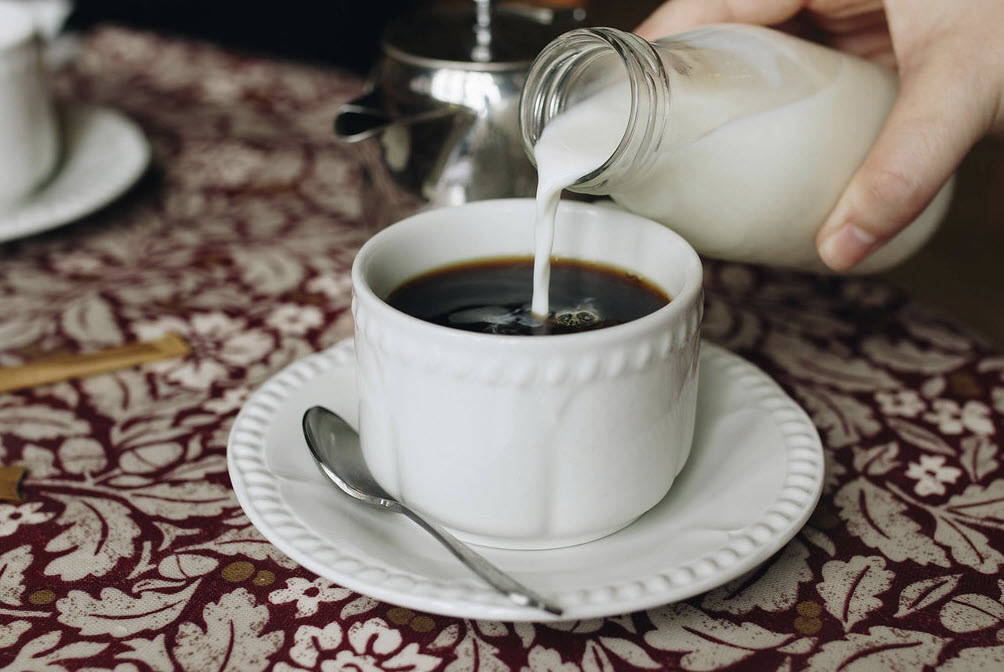 The number of people following a vegan diet has increased by 500% in the last two years.

One of the biggest challenges that many people face when switching to a plant based diet is finding a suitable replacement for the dairy milk that they have in their coffee.

Here we will go through what the best vegan milks are for different types of coffee drinks.

When adding a splash of milk to a black filter coffee you want something with a thick creamy texture and a neutral flavour to round out the sharp, bitter notes of the coffee without altering its flavor profile too much.

The three best types of milk for these purposes are: oat milk, cashew milk and coconut milk.

Oat milk is the most popular milk to use in coffee making because of its neutral taste and ability to handle relatively high temperatures without splitting or curdling.

Oat milk tastes very similar to cow’s milk and therefore provides an excellent means of rounding off the bitter notes of a coffee. It is slightly sweeter than dairy milk, so you may want to adjust the amount of sugar that you add to your coffee when you use oat milk.

Oat milk is slightly thinner and less creamy than cow’s milk (oat milk’s texture is somewhere between 1% and 2% cow’s milk) so you may want to use slightly more of it in your coffee than you would do with cow’s milk.

Cashew milk is the thickest of the non-dairy milks and therefore an excellent substitute for people who take cream in their coffee.

Cashew milk has a stronger flavor than oat milk, but it is still less nutty than almond milk and therefore shouldn’t overpower your coffee too much.

The only reason why I wouldn’t recommend it over oat milk is because cashew milk is significantly more expensive than oat milk and that it can be a bit too sweet for people who do not usually have sugar in their coffee.

Coconut milk also has a creamy texture and will not split when exposed to heat and acidity. This also makes it suitable for having in a filter coffee.

Many people assume that coconut milk has a strong coconut flavor that will clash with the flavor of coffee. I think this is because people often confuse coconut milk with coconut cream (the latter is what is normally used in Southeast Asian curries) which has a much stronger “coconutty” taste.

Coconut milk does have a more distinct flavor than oat or nut milk, but it’s still subtle enough to be enjoyed in coffee by most people.

Which non-dairy milks are unsuitable for filter coffee?

I wouldn’t recommend having soy milk or almond milk in filter coffee. Both these milks split quite easily when exposed to high temperatures or acidity, and filter coffee has both of these qualities.

I also wouldn’t recommend rice milk for coffee making. It is just too thin to provide the creamy texture that you are trying to create when adding milk to coffee.

Which non-dairy milks are the best for frothed coffees?

If you want to make vegan friendly frothed espresso drinks like latte and cappuccino then you will need to use a plant-based milk that is high in fat and protein.

You increase the volume of milk when you froth it by stretching out its proteins, and the fat in milk is necessary to give it the “creamy-mouth” feel that makes frothed milk so moreish.

Oat milk is a very popular choice for frothing because of its relatively high protein content and its ability to stand high heats without splitting.

There really is no downside to using oat milk for frothing, however it does take around 50% longer to froth than cow’s milk due to the fact that it does not contain quite as much protein in comparison.

Pea milk makes a finer foam with smaller bubbles than oat milk. This makes it the best option for making cappuccino which traditionally should have as fine a foam as possible (also known as “microfoam”).

Pea milk can be hard to find and expensive compared to other plant based milks, so unless you specifically want to make cappuccino, you might be better off with oat milk.

Soy milk has the highest protein content out of all the plant based milks and will therefore grow in volume the most when it is frothed. It is therefore a good choice if you want to make longer milk based coffee drinks like latte.

The only downside of frothing soy milk is that it can split under high temperatures. This means that you should froth it in short intervals, something like ten seconds of frothing followed by a five second break. This should ensure that the milk does not split due to too much heat.

What is the Deal with Barista Milks?

You may have noticed that plant-based milk companies are starting to release specialised “barista milks” that are designed to be frothed.

These are simply milks with extra vegetable fat added to them to give them a creamier mouth feel when frothed. This fat usually comes from some sort of vegetable oil.

Barista milks do tend to froth up better than non-barista milks, however their added fat means that they might be less suitable if you are swapping out dairy for health reasons.

This article was written by Oli Baise. Oli is a barista and the Founder of the coffee blog Drinky Coffee.

Enter your email and receive 15% off your first order.

Koffee Kult has a dedicated team that is passionate about delivering the highest quality roasted coffee beans in the world. However, the true stars of the show come in a different form. They're roastfully robust. They bring the heat. They're the work horses that bring the fire each and every day.

What's better than Koffee Kult coffee? More Koffee Kult coffee. With our bundle option, you get six premium 12oz or 32oz coffees at a massive discount. You can mix and match however you want. Order one-time or sign up for a subscription. The options are endless!

Koffee Kult sources the highest quality 100% Arabica coffee beans from all over the world. No matter where your favorite beans come from, rest assured that if we roast it at Koffee Kult, it's a premium quality bean. Once we source coffee beans, we do everything possible to preserve that quality. Our roastmaster oversees the beans from hand selecting each green coffee bean to roasting to packaging to ensure only the best is sent directly to customers.